skip to main | skip to sidebar

Peter Bearman was the founding director of ISERP, serving from the Institute's launch in 2000 until 2008. A recipient of the NIH Director's Pioneer Award in 2007, Bearman is currently investigating the social determinants of the autism epidemic. A specialist in network analysis, Bearman co-designed the National Longitudinal Study of Adolescent Health and has used the data extensively for research on topics including adolescent sexual networks, networks of disease transmission, and genetic influences on same-sex preference. He has also conducted research in historical sociology, including Relations into Rhetorics: Local Elite Social Structure in Norfolk, England, 1540-1640 (Rutgers, 1993). He is the author of Doormen (University of Chicago Press, 2005).

This event is free and open to the public. For details on schedules, locations, speakers, and topics, visit our full calendar of events at www.iserp.columbia.edu.The Institute for Social and Economic Research and Policy (ISERP) is the research arm of the social sciences at Columbia University. Its core mission is to catalyze and produce pioneering social science research and to shape public policy by integrating knowledge and methods across the social science disciplines.
Posted by Samantha Barrow at 11:21 AM No comments:

I just received a link to today's Our Bodies Ourselves blog post announcing a decision by a judge in the United States District Court for the Southern District of New York in Manhattan that invalidates the patents held by Myriad Genetics for the BRCA1 and BRCA2 genes. The US Judge said in the ruling that the "isolated DNA is not markedly different from native DNA as it exists in nature” and thus aren’t novel enough to qualify for patent protection. OBOS had joined the suit brought last summer by the ACLU against Myriad, the US Patent and Trademark Office and the University of Utah Research Foundation. Read the blog post for links to the decision and more information about the lawsuit.
Posted by Marsha Hurst at 8:03 PM No comments: 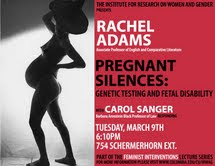 Rachel Adams, a participant in our Narrative Genetics seminar, will be giving a talk on disability and prenatal testing at Columbia on March 9. All are welcome.
Posted by Marsha Hurst at 6:36 PM No comments:

6:10-8pm, Case Lounge, Columbia University School of Law
Posted by Samantha Barrow at 11:12 AM No comments:

Autism, it seems, is a contemporary paradigmatic stadium in which genetics, parenting, social factors, environmental toxins compete for causal authority. This past month, autism—or autism spectrum disorder as the draft DSM-V proposes to redefine the condition--has received a great deal of attention. In 1998 The Lancet published a study based on research by Andrew Wakefield that linked autism in the UK to the MMR vaccine. As a result of the study’s publication, many parents in the UK refused to have their children vaccinated. In January of this year a British panel found that Wakefield had failed to disclose a conflict of interest—as a paid advisor to attorneys for parents suing the vaccine manufacturer--and that the study itself was conducted without adherence to proper ethical standards of consent. Following the panel’s report, The Lancet retracted the 1998 paper from publication. Meanwhile, a number of recent studies have focused on rates of autism in California. The online journal Autism Research examined yet again the question of whether and how parental age has contributed to the increase rates of autism. A 10 year study of births in California concluded that maternal and paternal age each contribute independently to higher rates of autism, accounting for 4.6% of the increase over the decade under study. Two other studies found clusters of autism in California cities. One, out of UC Davis found 10 clusters in the San Francisco and Los Angeles areas, and associated these higher rates with high rates of parental education. The other study of autism prevalence in California was done by Columbia University based researchers led by Peter Bearman, Jonathan Cole Professor of the Social Sciences and our May 6 Narrative Genetics seminar guest. This group found a primary cluster in the West Hollywood area and secondary clusters in other parts of LA. While they did not attempt to identify cause, they linked higher rates to local variables, such as environmental toxins or social influences. We look forward to discussing all this in May.
Posted by Marsha Hurst at 7:50 PM No comments:

In Fashion and Style: Turner Syndrome

Alone on a Path Shared by Many

"A thorny and provocative book about cancer, racism, scientific ethics and crippling poverty, “The Immortal Life of Henrietta Lacks” also floods over you like a narrative dam break, as if someone had managed to distill and purify the more addictive qualities of “Erin Brockovich,” “Midnight in the Garden of Good and Evil” and “The Andromeda Strain.” More than 10 years in the making, it feels like the book Ms. Skloot was born to write. It signals the arrival of a raw but quite real talent." - Dwight Garner
read full review here:
http://www.nytimes.com/2010/02/03/books/03book.html?scp=1&sq=skloot&st=cse
In the Health section, Denise Grady writes: "Fifty years after Henrietta Lacks died of cervical cancer in the “colored” ward at Johns Hopkins Hospital, her daughter finally got a chance to see the legacy she had unknowingly left to science. A researcher in a lab at Hopkins swung open a freezer door and showed the daughter, Deborah Lacks-Pullum, thousands of vials, each holding millions of cells descended from a bit of tissue that doctors had snipped from her mother’s cervix."
read full story here:
http://www.nytimes.com/2010/02/02/health/02seco.html?scp=3&sq=skloot&st=cse
Posted by Samantha Barrow at 7:25 PM No comments:

This blog is an extension of the work, the discourse, the teaching and learning that takes place in the multidisciplinary Narrative Genetics Seminar at ISERP (Institute of Social and Economic Research and Policy), Columbia University. We welcome bloggers from among the ever widening world of health professionals, scholars, writers and others who have studied, learned, and taught with us.

The opinions expressed on this website are solely those of the contributors, and do not represent the views of any program at Columbia University or any other organized society or association.

[Thank you to Medical Humanities Blog for modeling the form and language of this disclaimer.]